Tiruvannamalai Visit of His Holiness 11th June to 17th June

His Holiness was then received at Raja Rajeshwari Temple and then at Shankar Math. It was about 11.45 PM when His Holiness retired for the day.

14th June was Dwadashi in the morning followed with Pradosha & Shukravara Puja in the evening.

Pournami Puja was performed in the night followed with Chandradarshanam.

Temple honours was given to His Holiness at the Mandapam in front of Amman Sannidhi. The Shivacharyas & temple authorities were blessed with shawl and prasadams by Srimatam Camp officials in presence of His Holiness.

Several devotees took the opportunity to perform Bhishavandanam & Pada Puja. Many other devotees from Chennai, Bangalore & Andhra came to Tiruvannamalai to have darshan of His Holiness in this divine Kshetram. 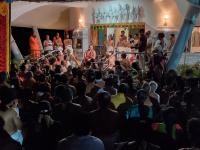