Pujyashri Acharyal arrived at Ilayathangudi at 7 PM on 22nd June, 2019. His Holiness was received at the town entrance by the residents of Ilayathangudi. His Holiness was then received at the Yagasalai erected in front of Kailashanatha Swamy temple for the Mahaswamy Murti Pratishtha to be performed on the banks of the temple tank, known as Pralaya Teertha. His Holiness delivered Anugraha Bhashanam and Purnahuti was performed. His Holiness spoke about the Acharya Parampara with special focus from 65th Acharya onwards, and also the connection & significance of Ilayathangudi town with the Kanchi Math.
The Mahaswamy had stayed in Ilayathangudi for two years in 1961/62 along with His Holiness Pujya Sri Jayendra Saraswathi Shankaracharya Swamigal. The first Vyasa Bharata Agama Shilpa Sadas was held at that time in Ilayathangudi. Commemorating the visit of His Holiness and his Anushthanams performed at the temple tank, the residents of the town led by SL Narayanan Chettiar, have constructed Mantapam with Maha Swamy Murthi in stone on the Padithurai of the temple tank. The photo of Mahaswamy performing Anushthana in that very place was kept in the Yagashala. The beauty of the photo is that it has captured the reflection of the Acharya impeccably as if denoting his deep meditation.

His Holiness then arrived at the Adhishthanam of 65th Acharya of Sri Kanchi Kamakoti Peetam, Sri Sudarsana Mahadevendra Saraswathi Swamigal. The Adhishthanam was renovated recently and the Kumbhabhishekam is slated for 23rd June, 2019. His Holiness attended the Yagashala Purnahuti.

In the early hours today, Yagashala Purnahutis were performed in the divine presence of His Holiness. His Holiness performed the Kumbhabhishekam at the Gopuram and later Mahabhishekams at the shrine between 6 to 7 AM.

His Holiness then reached the precincts of Sri Kailashanatha Swamy temple. The Yagashala Purnahutis were performed and then Kalashabhishekam at the Mandapam. His Holiness performed the Mahabhishekam to the Murthi. His Holiness then blessed the gathering with Anugraha Bhashanam stressing the importance of grace of Guru for attainment of Daiva Anugraha, about Kanchi Acharyas and also about performance of Dharmic deeds. His Holiness also appreciated the service of Nagarathar community in construction & maintenance of temples and worship therein. 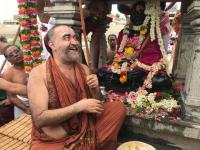