His Holiness visit to Tiruvanaikaval
17-22 June

His Holiness arrived on 17th June night at around 8.30 PM. His Holiness was received at the Western Gopuram. The residents of North Mada Veethi received with Purna Kumbham in front of their houses. After offering prayers at the Ganapati Shrine His Holiness gave darshan and discourse to waiting devotees.

His Holiness left Tiruvanaikaval for Gunaseelam in the evening. The Bhattacharyas belonging to Vaikhanasa tradition, received His Holiness and performed special Pujas in the Garbha Gruha of Prasanna Venkateshwara Swamy. Later the Bhattacharyas sought blessings of His Holiness for Kalakarshana Vidhi to commence shortly and explained the various works to be taken for renovation and other additional works to be taken up in Prakaram walls. His Holiness blessed the endeavour and also visited the Shilpa shala where the stones for the Prakaram walls and other Sannadhis are being sculpted.  His Holiness later visited Hemavarneshwari Sametha Dharmikanatha Swamy temple at Gunaseelam and returned to Srimatam Camp to perform evening Puja.

His Holiness left for Melatoor at around 4.45 PM after Trikala Puja. Melatoor is a village about 20 kms from Kumbakonam/ Thanjavur. The village is famous for annual Narasimha Jayanthi festival. His Holiness was received at the outskirts of the village with Nadaswaram and other traditional vadyams. His Holiness walked from that point onwards and first visited the Perumal Koil. Then receiving Purna Kumbhams at various Agrahara houses His Holiness blessed the Veda Pathashala and honoured the senior Vidwans & Adhyapaks. Pathashala students wee blessed with fruits. Krishna Yajur & Sama Veda is being taught there. His Holiness then went to Unnathapureeshwarar Shiva temple. Later His Holiness went around the village and entered the Dakshinamurthy Vinayaka Swamy temple (Kumbhabhishekam temple). Purnahuti was performed in the divine presence of His Holiness. His Holiness delivered Anugraha Bhashanam and blessed all the devotees. His Holiness returned to camp at 11 PM after visiting Kalancheri village enroute.

His Holiness performed Uchi Kala Abhisheka & Darshan at Akhilandeswari Amman Sannidhi. His Holiness went along with the daily routine called as “Alavattam” ritual. This is a unique ritual performed daily only at Tiruvanaikaval. The “Morai Panditar”- officiating priest of the day adorns Ambal attire and walks from the Ambal Sannidhi to the Sannidhi of Jambukeshwara Swamy and performs Ucchi Kala Puja. Two persons hold the royal insignia Umbrella & Alavattam, one drummer & the temple elephant accompany the Pandithar for this ritual. After the Pujas at Swamy Sannidhi, the Pandithar in Ambal attire returns to Akhilandeswari Sannidhi. Till such time the door is closed in the Sannidhi. Then, the Uchi Kala Deeparadhana is performed by the Pandithar. The alavattam ritual as its known was reminiceint of the Kshetra Mahatmyam of, the ancient Shiva Linga being worshipped by Ambal, elephant & Silandi.

His Holiness accompanied this entire ritual creating lot of enthusiasm among the devotees. 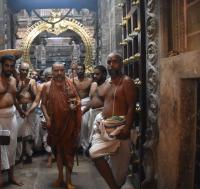 His Holiness left Tiruvanaikaval at around 6 PM for Ilayathangudi. After the Trikala Puja, His Holiness visited Panchamukheswara Temple inside the Math premises and performed Deepradhana. Bhikshavandana Prasadams were given to devotees in the temple.

Before embarking for the next camp, His Holiness went to various Mandapams, the upper floors in the Tiruvanaikaval Math and also blessed the Pathashala Vidyarthis. 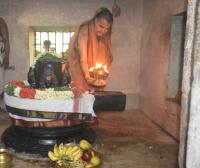