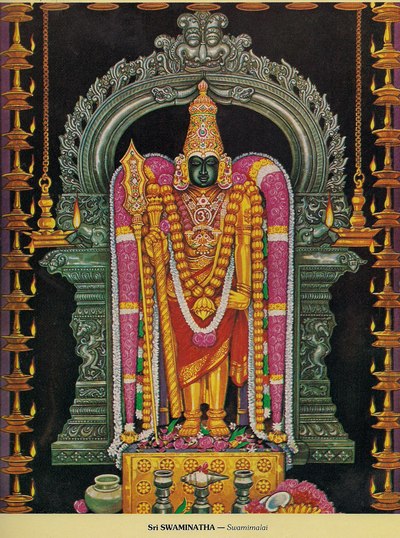 With the Divine direction and benign blessings of
Jagadguru Sankaracharyas of Sri Kanchi Kamakoti Peetam,
the following Parayanams were conducted during 18-10-2016 to 5-11-2016.

For more details and complete schedule of parayanams for 2016-17, click below:

It is situated on a small hillock near Kumbakonam, Tanjore district.  The six feet tall idol is known as Swaminatha, who is reputed to have initiated his father Siva into the power and meaning of OM the Pranava Mantra.  The temple for Swaminatha, the son, is on a higher pedestal than that of the father(Siva).

ABOUT THE VEDA PARAYANAM PROGRAMME AT SWAMIMALAI

His Holiness Jagadguru Sankaracharya Sri Chandrasekharendra Saraswathi Swamigal, the 68th Peetadhipathi of Kanchi Kamakoti Peetam had taken upon Himself, with missionary zeal, the task of  working for the preservation of Vedic tradition, culture, practice, and propagation of this vast Vedic treasure, in its pristine pure form, handed down to our generation by our scholarly ancestors.   We are all indebted to the Sage of Kanchi, our Paramaacharya, as HH is popularly referred to, that but for His Holiness’s  forethought, instinct and unstinted  efforts,  some of the rare sakhas  like ‘Atharvana Sounaka’  would have been lost for ever.

With this background, Their Holiness Jagadguru Sri Jayendra Saraswathi Swamigal and Jagadguru Sri Sankara Vijayendra Sarawathi Swamiagl, the 69th & 70th  Peetadhipathees of Kanchi Kamakoti Peetam directed that  Nithya Veda Parayanam be organized at Swamimalai Sri SwaminathaSwamy Temple.
This apt selection of venue is significant that the “Poorvaasrama Kuladaivam” of  HH MahaPeriava Sri Chandrasekharendra Sarawathi Swamigal is Swamimalai Sri SwaminathaSwamy;   besides,  Swamimalai is one of the six sacred Subramanya Kshetrams where the Divine Son Subramanya, assumed the name of Swaminathaswami and  initiated  “Pranavopadesam’ to Father Lord Siva.

Swamimalai Veda Parayanam was  Inaugurated on 13-09-2010 by  6 Veda Vidvangal drawn 2 each from Rig, Krishna Yajur & Gouthama Sama Vedam;  followed by Parayanam on every Anusham.

From  24-03-2011 Anusham, the content  of the parayanam was enhanced to include  the Sukla Yajur Vedam  and the rare Jaimini Sakhai of Sama Vedam.  Thus now 10  Vedic Scholars, 2 each from Rig, Krishna Yajur, Sukla Yajur, Gouthama  &  Jaimini Sakhas of Sama Vedam participate  in the Parayanam.

Any Program on Veda Parayanam is deemed to be exhaustive  only when all the four Vedas
(including Atharvana Vedam are accommodated. However Atharvana Veda Vidvangal have to be drafted from out-stations.  So, In our efforts to bring Atharvana Vedam also into the perview of  ‘Swamimalai Veda Parayanam’,  an annual program was arranged.  During 6th to  8th Aug 2011, ending with Anusham  on 8th Aug 2011,  ATHARVANA VEDA SAMHITHA POORNA PARAYANAM was rendered by 4 South Indian Atharvana Veda Pundits. It was an unique  programme in the sense that the 4 Pundits were “Dwi-Vedies” i.e.  besides their own Veda Sakhai, have additionally completed Vedaabyasam of Atharvana Sounaka Sakhai.  Two of these scholars are the ones whom during mid-1960s HH Sri Maha Periava sponsored to undergo Atharva Veda Paatam for 5 years under an eminent scholar at Gujarat.   From the year 2012 onwards, this is conducted for 4 days at a stretch.
For further reading, an  article  titled “Atharvana Vedam - HH’s initiative” is presented separately.

It is customary  that  the “Vyasa Poojai Vasthram”  from Sri  Kanchi Kamakoti Peetam  is offered to  Swamimalai Sri Swaminathaswamy every year during Chaathurmasya Vratham.
In line with this tradition, as directed by their Holiness, on the concluding day of Atharva Veda Parayanam 8-8-2011 Anusham,  Ushath Kala Abhishekam was performed to the Lord;  Sri Rudram, Pancha Rudram, Sama Veda Rudram, Atharvana Veda Rudram, Kumaara Sooktham followed by chamakam, Purusha Sooktham & Nakshatra Sooktham etc were all rendered by Veda Parayana Pundits.   Sri Swaminathaswami was adorned with the “Vyasa Poojai Vastram”.   The entire event was an  enthralling divine scenario.
“Kumaara Bhojanam”  was  arranged as a part of Vasthra Samarpanam programme.
In the evening, regular Anusha Parayanam was performed by 14 Vedic Scholars including  Atharva Veda Vidvans.